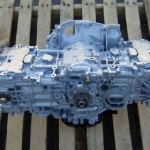 The Subaru is very popular car. The thing that sets them apart from most other cars is their all wheel drive system. All wheel drive makes the Subaru great in slippery road conditions. Snow, ice, slush, and gravel.

first place is the wise option. For not too much more than the cost of replacing your head gaskets, you can have completely Rebuilt Engine for your Subaru Legacy, Forester, Outback, Impreza, or Baja. We address the head gasket issue when we rebuild a Subaru EJ2.5 Engine.

The Subaru Engine is one of the more difficult engines to rebuild properly. That