Why JDM Engines Have Such Low Mileage

First, what is a JDM Engine? JDM is short hand for Japanese Domestic Market. A JDM Engine is an engine from a Japanese Domestic Market Car. A car manufactured for sale in Japan. I’ve been asked literally hundreds of times why do JDM engines have such low mileage. I’ve addressed the question in our Frequently Asked Questions, but I’d like to make it very clear for people that still have questions regarding this subject.

The average age of a car in Japan is about 7 years. The average yearly mileage is about 5300. That puts the average mileage of a cars in Japan going out of service at 37000 miles. This is the lowest number of any country in the world. The Japanese people are very passionate about their cars. New cars are status symbols to them. Most car owners are very conscientious about taking care of their cars. They bring their new cars into the dealership for the services prescribed by the car manufacturer. It is a point of pride for the Japanese people. They are proud of their car industry. They produce Subaru, Toyota, Nissan, Honda, Lexus, Mitsubishi and others. Japan also has a great public transportation system that most of the population uses regularly. They are especially proud of their trains. Consequently, cars are used mostly on weekends or to drive to the train station. Japan is an island (actually several islands) country surrounded by salt water. This environment is very rust and corrosion friendly. Not so good for the longevity of cars. Gasoline costs more than twice what it does in the USA. Additionally, Japan has the most stringent car inspection/emissions system in the world. It’s called Shaken.

Shaken is the Japanese road worthiness inspection that car owners must go through every 2 years. Starting when a car is 3 years old. It is the strictest car inspection in the world. Of all the factors that contribute to the short lifespan of a Japanese car, the Shaken is at the top of the list. Shaken usually costs at least $1500 and could cost much more. And the price goes up as the car ages. Shaken includes registration and renewel fees, and testing that is done in the extreme. Exterior inspection will fail if there is ann body damage whatsoever. Any dent, scratch, or rust must be repaired for the car to be deemed road-worthy. There is an undercarriage inspection which includes the entire suspension. The Emission test allows no more than 1% more than normal. The older a car gets, the harder it is to pass this test. All lights are tested and head lamps must be perfectly aimed. The speedometer is tested by running the car on a dynamometer. The interior is inspected for compliance with Japanese Transportation law. By the third inspection, most cars are removed from service. This condition results in high quality, low mileage engines and transmission being available for sale. Thousands of containers of these engines are are shipped to the _U_SA every year. This has been happening since the 1980’s. 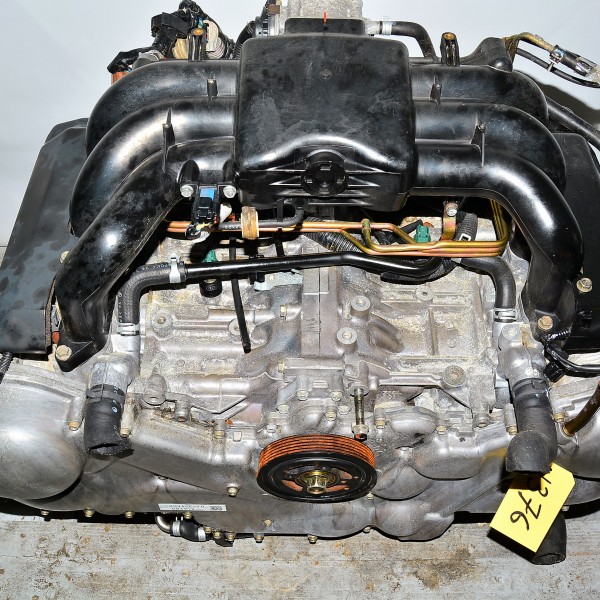 has a large stock of these engines for sale. There are many engines that we do not offer as rebuilt because of the availability of the low mile JDM Engines. A good example of this is the Subaru EZ30 Tribeca/Legacy. The cost a a domestic EZ30 Engine would cost more and have a lot more miles on it. A rebuilt EZ30 would cost close to $4000 or more. The JDM EZ30 is clearly the the best value for anyone looking to purchase this engine. Another Subaru engine that we offer is EJ20. It is a direct replacement engine for any 2000-2005 Forester, Legacy, Outback, Impreza or Baja fitted with the EJ2.5 Engine. A very cost effective replacement engine for those Subarus’. Enginesus has sold 300+ of this engine. We have many other JDM Engines, all excellent values.

One last thing. We get many customers saying something along the lines of “I hear that Japan has a law that cars there can’t be driven past 50 thousand miles”. That totally not true. There is no such law. A Japanese citizen can drive their car as long as they wish. The wish turns out to be on average 7 years because of all the reasons listed in this article. I hope that this article has cleared up some of the many misconceptions about JDM Engines.

Best service I've had on eBay. Hope to do business again Thanks!
https://www.enginesus.com/testimonials/1169/
Fedex Damage. EnginesUS went all out to make it right. Excellent result thanks!!

Reputable and honest seller, highly recommended. Would buy from again!
https://www.enginesus.com/testimonials/1172/
Thanks for working so hard to help us out! Engine is running great!

Thanks for working so hard to help us out! Engine is running great!
https://www.enginesus.com/testimonials/1173/
0
EnginesUs
Call Now Button